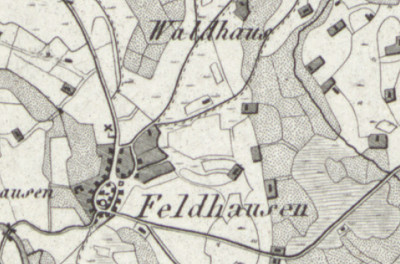 Wilhelmina Meyer (Meijer)  was born on April 12, 1799 in Teich (near Veldhausen) and was baptized on April 14 in Veldhausen. Her parents were Herbert Meijer and Johanna Lens, and her father was a Schuster, a shoemaker in Veldhausen.

Wilhelmina Meyer married Hendrik Jan Walkotte in Veldhausen on July 6, 1819. Together they had nine children:

Leaving the County for Michigan

On December 16, 1847, Wilhelmina Meyer Walkotte and her family (except for her eldest sons, Hendrik and Harmen) left Uelsen for Rotterdam. On March 5, 1848, they left port aboard the three–mast sailing ship the F.J. Wichelhausen.

Not all of the emigrating family members arrived in New York, however. Wilhelmina’s husband Hendrik Jan died aboard the ship on May 5, and her youngest son Gerrit Jan died two days later. They were both buried at sea.

After living in Middletown, New Jersey for a few years, Wilhelmina, four of her sons, and her daughter moved on to Drenthe, Michigan, settling there in 1853. There she passed away on January 1, 1882, but not before being reunited with her son Harm and his family, who emigrated in 1881.