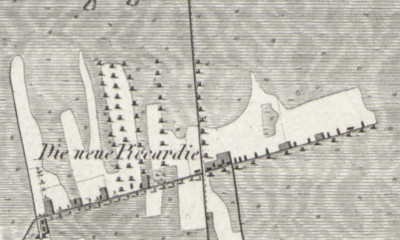 According to the Veldhausen church records, Hendrik Jan Walkotte was born on July 28, 1792 in Neue Piccardie (now Georgsdorf) and was baptized on August 1 in Veldhausen. His parents were Hendrik Walkotte and Aale Freriks, who ran a farm  in Neue Piccardie. According to the Emlichheim church records, Hendrik Jan worked as a farmer and also as a schoolmaster in Tinholt from 1832.

On July 6, 1819, Hendrik Jan Walkotte married Wilhelmina Meyer (Meijer) in Veldhausen. They had nine children (the Uelsen, Veldhausen, and Emlichheim church books in Grafschaft Bentheim differ on some of the dates):

The Hendrik Jan Walkotte family was part of the Seceder emigrants who left Grafschaft Bentheim for America in 1847–48. On December 16, 1847, the family (except for sons Hendrik and Harmen) left Uelsen for Rotterdam in the company of Berend Frerichs, his wife, and their four children. Here they boarded the sailing ship F.J. Wichelhausen. Due to the weather and the ship needing repairs, however, they did not leave port until March 5, 1848.

On May 5, 1848, Hendrik Jan Walkotte died aboard the F.J. Wichelhausen after a long illness. His son Gerrit Jan died two days later. Both were buried at sea. By 1853, his widow and some of their children had settled in Michigan.