About the Bentheimers International Society

The Bentheimers International Society was started in West Michigan (U.S.A.) by genealogists and “amateur” historians who trace their roots back to Grafschaft Bentheim, Germany. Many of us have researched as far back as possible in state, U.S., and Canadian records, and we are now researching the records in Grafschaft Bentheim (and also those in the Netherlands and neighboring German areas).

Not only are we interested in our ancestors’ dates and names, but we also want to learn about where and how they lived. The Society’s motto is Preserving and Connecting:

It is the Society’s intention that this website will further the goals of Preserving and Connecting. Furthermore, we will share knowledge about Grafschaft Bentheim and its North American settlements to website visitors who are looking for information that helps to “complete” their family trees. Please bookmark bentheimheritage.com so you can find us easily as our site grows. If you find our resources helpful, consider becoming a member! 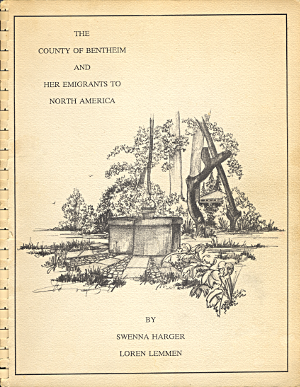 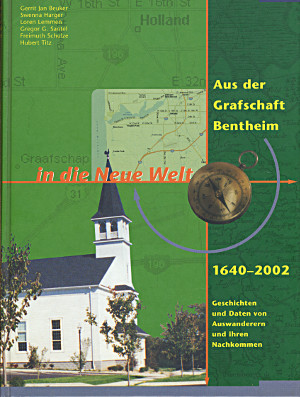 Above left: The County of Bentheim and Her Emigrants To North America, published in 1990 by Swenna Harger and Loren Lemmen. Above right: Aus der Grafschaft Bentheim in die Neue Welt 1640–2002 translates Harger and Lemmen’s book, plus adds more information from the County.

On November 10, around 30 people meet at the Sveden House restaurant in Holland, Michigan. They have contributed material to a new book, Aus der Grafschaft Bentheim in die Neue Welt 1640–2002: Geschichten und Daten von Auswanderern und ihren Nachkommen, which has recently been published in Bad Bentheim, Germany. One of the authors, Swenna Harger, has called them together to pick up their copies. After the meal, Swenna brings up a new topic: What do you think about starting a heritage society about Grafschaft Bentheim and her emigrants? After discussing the idea, the people enthusiastically vote for it and elect officers.

2003: The First Newsletter Is Published

The only Newsletter to be published this year, Issue One weighs in at ten half–pages. Society president Herb Kraker writes about the challenges and rewards of tracing his family history in Grafschaft Bentheim—for example, his great–grandparents’ farm might have existed for 400–500 years, and there are distant relatives still living on the farm. He also notes his interest in connecting with distant family in the County. Issue One presents the Society’s first officers and features a translation of Chapter One of Ludwig Sager’s book, Grafschaft Bentheim in History. Translations of Sager’s 23 chapters appear in Newsletter issues until 2013. 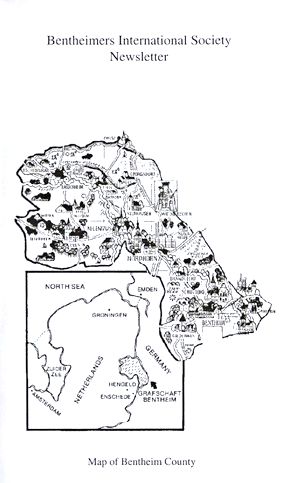 The Society publishes two Newsletters in 2004. Issue Two consists of twelve half–pages and features the Klompmakers’ account of emigrating in the 1950s. Issue Three uses the full–page format for the first time and features the Heck/Vos families’ account of emigrating in the 1870s and 1880s. It also includes a profile of the early years of Bentheim, Michigan, and a notice of the Society potluck picnic to be held in August at the Bentheim Reformed Church in Hamilton, Michigan. 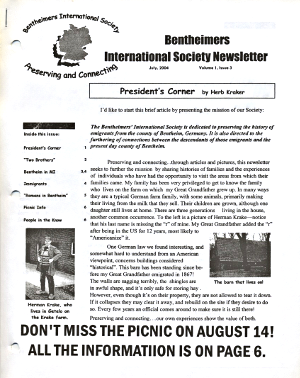 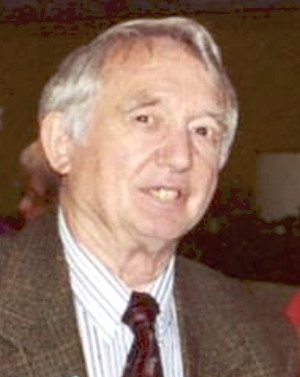 2004: The Society In Germany Is Formed

In Issue Four, the Society announces its German International Representative. Gerrit Schippers lived in Veldhausen with his wife Albertine. He taught himself English and was an avid researcher of his own family history; his interest in the Society stemmed from discovering that he has distant relatives in the United States. “A few of my friends and relatives published histories of their families’ German and American generations,” he noted. “Sometimes we get tears in our eyes when we see what the first settlers experienced.” As our Representative in Grafschaft Bentheim, Gerrit connected local Grafschafters with their “Bentheimer” relatives in North America and translated the Society Newsletter until 2015.

During Holland, Michigan’s Tulip Time festival in May 2005, Gerrit and Albertine would attend the Society’s spring meeting, along with their relatives from Edmonton, Alberta, Canada. While in West Michigan, the Schippers visited the Graafschap Cemetery and were amazed by the number of German names on the tombstones.

In February, the Society’s first book is published. Beloved Family and Friends: Letters Between Grafschaft Bentheim and America 1847–1914 is a 147–page collection of 85 letters curated from over 200 that were available. Many of the letters have been translated into English for the first time, so they shed new light on the immigrant experience—as well as how people lived everyday life in Grafschaft Bentheim during the era. The book also contains numerous photographs and family biographies.

The Introduction sets the historical context for these letters, explaining how religion influenced where Grafschafters would emigrate to. The Upper County was predominantly Roman Catholic, so these emigrants often journeyed to Ohio (particularly Cincinnati) and points westward. In contrast, Lower County Grafschafters tended to be Protestant, so they followed earlier Protestant emigrants to Michigan. Beloved Family and Friends contains letters from both groups, although the book’s curators had only a handful of letters available to them from the Upper County.

The Introduction also explains Germany’s postal system during the era and how letters would be shared amongst families, piquing their interest in joining their relatives and neighbors in the New World.

Beloved Family and Friends’ publishing costs were generously underwritten by the James Jurries family; Harold Huizenga served as editor, and Swenna Harger and Loren Lemmen as curators. There are plans to publish a second volume. If you are interested in purchasing a copy, please use the form at the bottom of this page! 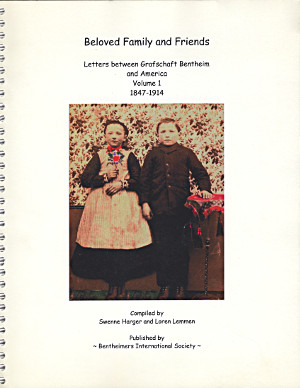 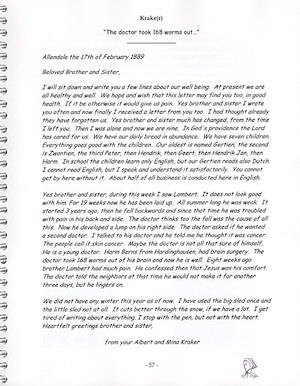 Beloved Family and Friends is a softcover book printed on US Letter paper stock (8.5 x 11 inches, or 215.9 mm x 279.4 mm) and is bound with double loop wire binding. Internal photographs and illustrations are in black and white, and the body text is set in an easily–readable typeface and size.

Above right: Letter written by Albert and Hermina Krake(r) in Allendale, Michigan to his brother and sister on February 17, 1889. “Harm Berns from Hardinghausen had brain surgery. The doctor took 168 worms out of his brain and now he is well.”

Albert Krake came from Getelo in 1867; in Michigan, he changed his name to Kraker. His wife Hermina Knoper was from Gölenkamp. In 1881, Albert walked from Graafschap to Allendale, viewed the farms that were for sale, and walked back the same day—a distance of 50 miles (80.4 km) round–trip!

Above: Society members have visited the county together every three years. From the top: outside the castle wall at Burg Bentheim (2008); Society members visited Prague, Czech Republic, and Geneva, Switzerland (2011); a memorable visit to Denmark (2014); the Normandy American Cemetery in Colleville–sur–Mer, France was also on the itinerary (2017).

In October, 36 members embark on a two–week European tour, including visits to York, England, Amsterdam, and Berlin; the Hermannsdenkmal (monument to Hermann the German) in the Teutoberg Forest; and Sanssouci, the summer palace of Frederick the Great in Potsdam. The highlight of the tour is five days in Grafschaft Bentheim, where they tour many of the County’s churches, including the Moravian community at Neugnadenfeld. Society members get to visit with family—or, if they haven’t researched their genealogical connection to the County just yet, they visit with another family who can make them feel at home.

The trip is the culmination of months of planning by Society board member Ken Rabbers and International Representative Gerrit Schippers. They ride in style in a coach provided by Richters Reisen (expertly manned by Rolf the Bus Driver) and stay at the beautiful Hotel am Stadtring in Nordhorn.

Since 2008, Society members have been visiting Grafschaft Bentheim as a group every three years! We thank Ken for his efforts and unflagging dedication in spearheading the tours.

In September, 32 visitors from Grafschaft Bentheim come to North America. Besides other attractions, they visit Greenfield Village and the Mackinac Bridge. In West Michigan, they stay at Hope College’s Hayworth Inn, visit the Heritage Center at Graafschap Christian Reformed Church, and meet the North American Society members for a joint meeting.

In June 2019, 42 Grafschafters make the trip. Destinations include Niagara Falls and Shipshewana, Indiana. In West Michigan, they stay with Society members, take in the Fourth of July celebrations—including the fireworks in Overijsel Township—and enjoy a breakfast meeting with Society members on July 5.

2012: German Society members in front of the Bentheim Reformed Church in Hamilton, Michigan.

If you would like more information about the Bentheimers International Society, leave us a comment below. Thank you!

4 thoughts on “About Us”

4 thoughts on “About Us”