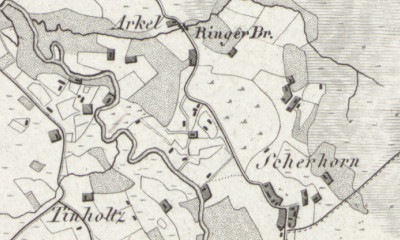 A portion of General Major von Le Coq‘s Grafschaft Bentheim map (1805) depicting the town of Tinholt. Harm Walkotte was born here in in 1821.

Harm Walkotte (Walkotten, Walcott) was born on November 18, 1821 in Tinholt and baptized on November 25 in Arkel (now a part of Hoogstede). The son of Hendrik Jan Walkotte and Willemina Meyer (Meijer), Harm worked as a Zimmermann, or carpenter.

In 1847 most of Harm’s family left Grafschaft Bentheim for the port of Rotterdam to begin emigrating to Michigan (see their biographies for more details): father Hendrik Jan, mother Willemina, sister Aleida, and brothers Albert, Hindrik Jan, Jan Harm, Adolf, Jan, and Gerrit Jan. They were members of the Seceders who disagreed with the Reformed church and took part in illegal worship services. Meanwhile, Harm and his brother Hendrick stayed in Germany.

Around 1880, Harm and Harmina decided to emigrate along with their children, so they sold all of their property and belongings they couldn’t take along. Just before the departure date, however, Harm came down with pneumonia. They decided that the four oldest children should leave as planned. These children set sail from Amsterdam on the S.S. Castor, arriving in New York on May 4, 1881. From there they went to their grandmother’s house in Drenthe, Michigan.

Soon Harm recovered from his bout with pneumonia, and he, Harmina, and their four youngest children left from Amsterdam aboard the S.S. Pollux, arriving in New York on May 23, 1881. They headed for Willemina’s house in Drenthe, and the family was reunited. After 33 years, Harm was finally able to see his mother again; she would pass away a few months later.

Harm took up farming in Michigan and was able to buy a farm in Allendale. This farm was located on 78th Avenue, one mile north of Lake Michigan Drive. He died on September 15, 1896 at the age of 75 and was buried in the Allendale Township Cemetery. His wife Harmina De Weerd Walkotte died on April 30, 1922 and was buried with him. 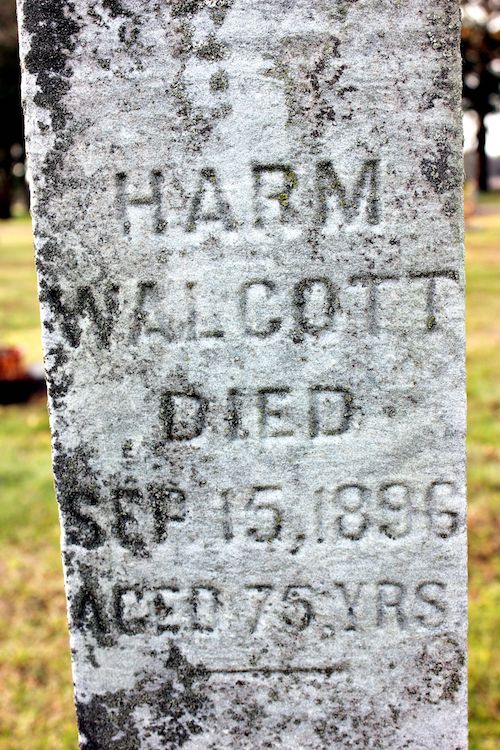