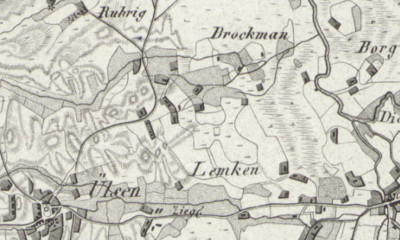 A portion of General Major von Le Coq‘s Grafschaft Bentheim map (1805) depicting the area where the community of Gölenkamp is found. Hermina Knoper was born here in 1857.

Hermina Knoper was born on December 29, 1857 in Gölenkamp to Peter Knoper and Gertien Warrink. Her brother Hermannus emigrated to Michigan in 1867. In 1874, when she was 17 years old, Hermina followed him. Then in 1881, her father and four of her siblings joined Hermannus and Hermina in the United States (her mother died in 1863). The State church in Grafschaft Bentheim was becoming too liberal for her family.

In 1876, two years after emigrating, Hermina married Albert Krake (Kraker) in the parsonage of the Graafschap Christian Reformed Church. The Rev. W.H. Frieling officiated. Albert’s parents were Hendrik Scholten and Swenne Krake of Getelo. Their son Albert had come to Michigan in 1873.

Albert and Hermina Kraker’s first home was a log cabin built on a 40-acre farm south of the village of Graafschap. Albert improved this property by constructing a barn there in 1877. He and Hermina had their first three children (Gertie, Susan, and Peter) in Graafschap, and 11 more in Allendale:

From Graafschap to Allendale

Albert and Hermina Knoper Kraker soon heard that several of their friends were finding land and farms in a settlement called Allendale in Ottawa County. So in the fall of 1881, Albert walked from Graafschap to Allendale (a distance of around 25 miles), found an 80-acre farm for sale, and decided to buy it. Then he walked back home to Graafschap later that day.

In the spring of 1882, they moved to Allendale. Here, Hermina found that her new home was made up of one room plus a kitchen, a bedroom, and a pantry. The inside of the house was roughly finished, with newspapers pasted over rough boards. The back kitchen was just a shed, separated about three feet from the rest of the house, and built right on the ground.

According to their daughter Susan, “The one room, bedroom and pantry were built on blocks of wood. In the summer we would creep under the house to play, thus keeping us out of the rain and hot sun.”

Albert gradually enlarged and improved the house as the family grew from three children to 14. Today this farm on 68th Avenue is a Centennial Farm. At some time, Albert also added an “r” to the end of  the Krake name. 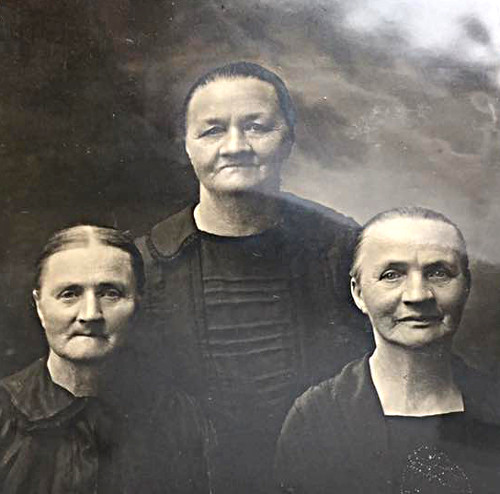 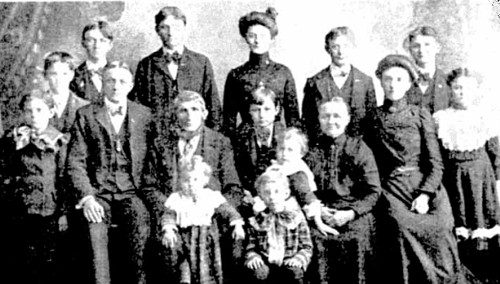 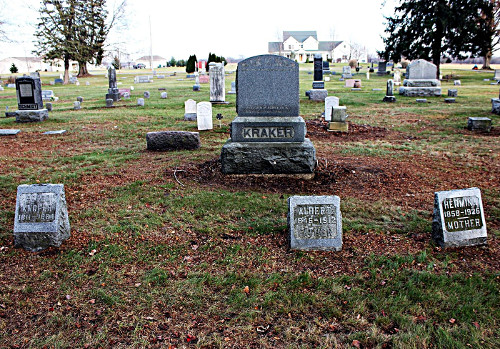 Hermina Knoper Kraker’s headstone in the Allendale Cemetery (far right). She is buried alongside her husband Albert Kraker (middle). To the left is Peter Knoper, her father. Photo by Scout at findagrave.com.