Some information for this biography was taken from “Die Familien der Kirchengemeinde Lage (1700–1900),” by Harm Schneider. 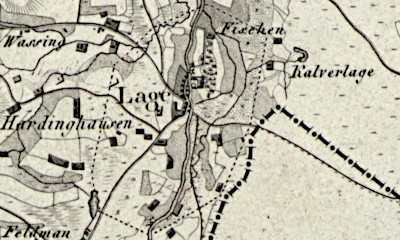 Jenneken Hoed was born on October 30, 1804 in Lage to Sander Hood and Harmine Schoo. Harmine was from Oude Dorp (Altendorf, today a part of Nordhorn). Sometime before 1834, Jenne married Albert Ten Brink in Lage. She already had a six–year–old daughter, Hendrika. Albert and Jenne Ten Brink had one son, Hendrik, who was born on January 13, 1834.

On August 7, 1857, the barque Von Stein entered New York harbor. On board were Albert and Jenneken Hoed Ten Brink and their two adult children. The foursome made their way to the village of Graafschap in Allegan County, Michigan, and bought a 40–acre farm in Laketown Township. Between 1860 and 1870, this farm grew in value from $200 to $700. Also, Jenne’s daughter Hendrika married Hendrikus Strabbing, an 1847 emigrant from Drenthe, the Netherlands, in October of 1858. Jenne’s first grandchild, Jan (John) Strabbing, was born on August 9, 1859 in Graafschap.

However, while in Overisel Township of this same month, Jenne suffered a cerebral hemorrhage or stroke (apoplexy) and died suddenly. It is currently not known where she was buried. Her husband Albert and son Hendrik continued to farm in Laketown until the mid–1870s. If you have information about where Jenne was buried, please use the contact form below so we can complete her story.

Jenneken Hoed and Albert Ten Brink’s family on the passenger arrivals list of the Von Stein immigrant ship. Above the Ten Brink names are those of fellow Grafschafters Hermann (Harm) Wolters, his wife Swenne Adriaans Wolters, and daughter Stine from Altendorf. 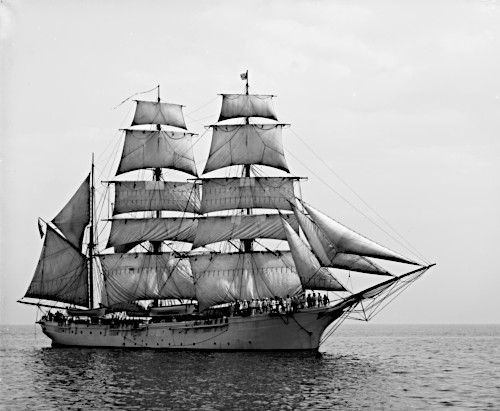 What is a “barque”? A barque (bark) is a type of sailing ship with three or more masts, with the aftmost mast rigged “fore and aft.” They typically had smaller crews than full–rigged ships, making them less expensive to operate. Pictured: the U.S. Revenue Cutter Salmon P. Chase.

The Michigan death registry entry for August 1859 showing Jenneken Hoed Ten Brink’s sudden death at the age of 46 from apoplexy.