The Lemmen–Ten Brink Agreement of 1877

Some information for this article is taken from "The Lemmen Family of Grafschaft Bentheim," by Lloyd J. Lemmen and Loren J. Lemmen. 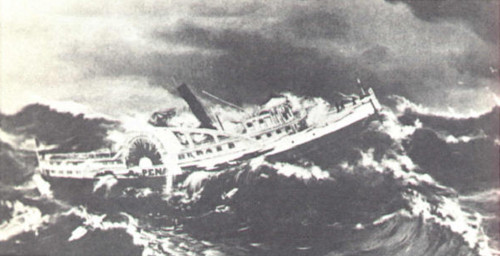 The P.S. Alpena as it struggled against the high seas of Lake Michigan in October, 1880. The Alpena’s sinking led to a historical mystery.

On August 18, 1877, Gerrit and Katie Lemmen and Hendrik Ten Brink entered into an agreement that would provide Hendrik with a home, as well as his funeral expenses. But the contract would be in effect for only a few years. The following is what we currently know about this situation.

Background Of The Lemmen–Ten Brink Contract

On August 7, 1857, 23-year-old Hendrik Ten Brink arrived at Castle Garden in New York Harbor with his parents and sister. They had left Lage, Grafschaft Bentheim to start a new life in America. The family soon settled in Laketown Township, Michigan, buying a 40–acre farm just west of the village of Graafschap. According to the 1860 Federal Census, this farm was valued at $200.

By this time, however, the Ten Brink family’s situation had changed. Only Hendrik and his father Albert are listed in the 1860 census. No longer on the farm were Hendrik’s mother Jenne Hoed and sister Hendrika:

The 1870 census still shows Albert and Hendrik living on the farm in Laketown Township. They had worked hard to improve their farm, as it was valued at $700 by this time.

But Albert and Hendrik Ten Brink’s lives seem to have taken another turn during the next few years: apparently, father Albert had passed away. Searches of ancestry.com, familysearch.org, and myheritage.com have come up empty–handed as to what happened to Hendrik’s father, Albert Ten Brink. Searching various cemetery readings found online has also yielded no answers.

The next time Hendrik is mentioned in historical records is August 18, 1877. Now 43 years old, Hendrik signed a contract with newlyweds Gerrit Lemmen and Katie Den Bleyker on their wedding day. In exchange for his $618, Hendrik was provided with living accommodations in their house.

The 1880 Federal Census provides evidence that the contract was in effect three years later:

On the 1880 Federal Census taken June 4 in Laketown Township, Hendrik Ten Brink was listed as a boarder with “no occupation” in the Gerrit Lemmen household.

In October, 1880, The P.S. Alpena was wrecked on Lake Michigan during a monstrous storm. When her cargo floated ashore, Gerrit Lemmen and other men risked the freezing water to recover valuables. He became sick and died on October 26, leaving Katie with two young daughters under the age of two.

The last time Hendrik Ten Brink is mentioned in records is in 1895. According to the Allegan County Return of Deaths register, he died on March 13 in Fillmore Township:

According to the death register, Hendrik Ten Brink died in Fillmore Township on March 13, 1895 of “Dropsy of the Heart.” His place of birth is listed as “Michigan,” no occupation is given, and his parents are “Unknown.”

The Lemmen–Ten Brink contract can be found on page 50 of Lloyd J. Lemmen’s book, The Lemmen Family. Lloyd writes the following introduction: “Preserved is this interesting article of agreement made at Graafschap in the County of Allegan and State of Michigan this eighteenth day of August 1877, between Gerrit Lemmen and Kaatje Lemmen, his wife of Laketown, County and State, aforesaid parties of the first part, and Hendrik Ten Brink of the same place, Witnesseth as follows Viz.—”

First: The said parties of the first part, for and in consideration of the sum of six hundred and eighteen dollars lawful money of the United State the receipt-whereof is hereby confessed and acknowledged do hereby bind themselves their heirs and assigns to keep, support and maintain the said Hendrik Ten Brink party of the second part hereto in a generous and reasonable manner, and to provide for him in boarding, lodging, washing, clothing, medical attendance and in the case of sickness, and in every respect treat him in a kind and friendly manner as might be expected if he was a member of the family during his natural lifetime, — and further to pay all his last sickness and funeral expenses.

Second. The said Hendrik Ten Brink party of the second part-hereto-agrees to stay and live with the said parties of the first part under the conditions set forth, in a peaceable and Gentleman like manner as might be reasonably be expected in his position, during his life or so long as the parties of the first part shall comply with the Conditions herein setforth and on their part to be performed.

Fourth. The said party of the second part shall also be entitled at anytime when he shall separate as above setforth, to one half of the Bees which he now owns Jointly or which he may own jointly at that time with the parties of the first part, and have the right to keep the same on the premises of the party of the first part as long as he may see fit free of charge.

Fifth: It is further mutually agreed that this Instrument shall be given in trust and remain with John H. Eppink Esq. of Graafschap aforesaid to be deposited in his safe for safekeeping and not to be removed from there without the consent of all parties concerned.

In witness whereof all parties have here unto set their their hands and seals at Graafschap aforesaid this 18th day of August A.D. 1877.”

Signed and sealed in the presence of

Taken together, the information presented above brings to mind a number of questions:

Bear in mind that the 1890 Federal Census, which perhaps could shed light on this mystery, was for the most part destroyed in a fire in 1921. If you have any answers to the above questions (or further information to add), please use the comment form below to contact us.

Note: Comments are approved before they are published on the website.