From Overisel To Saugatuck And Back In 1849

This article was written in 1891 by P. Schut, who resided in Overisel, Michigan. It was translated by Mrs. Amy (Slotman) Jansen. 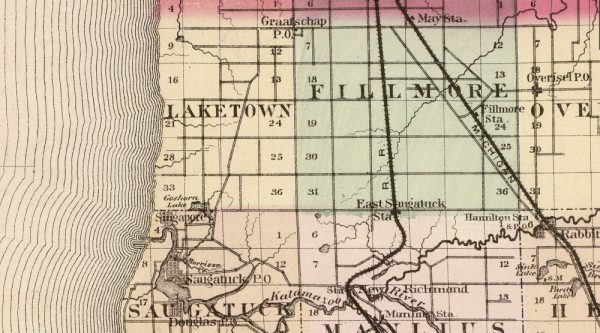 Overisel, Michigan was settled by Rev. Seine Bolks and his congregation of 23 families (around 150 people). They emigrated  from Overijssel, Netherlands in 1847 aboard the Audobon. They spent the winter in Syracuse, New York and arrived in Holland, Michigan in June of 1848.

It must have been in the winter of 1849–50. The snow lay deep, the way still untrodden, when a five­–man group decided it was in their interest to visit their neighbors and to make a trip to Saugatuck—or rather, they were forced to do so.

Their wives had no needles, thread, ribbon, or string anymore. Coffee, tea, and sugar were already long–forgotten or otherwise still unknown articles. The need became very urgent because they could not even mend an apron anymore, or sew on a button or sew a seam.

For the last few days, the mothers were very frugal and made excellent butter. Earlier, the men had decided to meet at the home of Rev. Seine Bolks, who then lived in a log hut on the south side of the village.

Setting Out On Their Journey From Overisel

It happened in this manner. First, the men prayed together. Men prayed more than now. Rev. Bolks said, “People, I am staying awake tonight until you return, and I will have the coffee ready.” Bravely rejoicing and with good cheer, the five–man group went forward, each man carrying an armload of butter.

They first stopped at the home of Mr. Anton Schorno, an old German settler who lived in Section 26, Fillmore Township. From there to the township line. How much the way twisted and turned, I do not know, but it is certain that the five miles became much longer because they could not follow the “Indian Trail” or the woodsmen’s footpath. Because they didn’t have either, they had to find their own way around the puddles and pools and ponds.

Nearer Saugatuck, the path became more beaten; but our group was tired even before they reached that path. In the evening, when people were beginning to put on their lights, they came to [a store in] Saugatuck.

When they set their butter on the counter, it was sliced through with a knife because no holes were allowed to be in it. The mothers were good workers and had done their duty carefully. The butter passed the test. And now—for the price? No, they did not even consider asking for money for the butter. It was entirely bartering; money is not alone a basis for trading.

The storekeeper had everything in his favor. He gave exactly as he chose. Each man received so many needles, pins, thread, ribbon, buttons, etc., the greatest necessities. For that, they had walked 14 miles through deep snow and on a long, unbeaten, untrodden way.

So, as speedily as possible, they ate their pieces of corn bread and started on their return trip. These were strong men and, in those days, men had to be very strong. I believe always that the Lord, in whose strength they had come over the ocean, was relied on here, and they were given exceptional bodily strength and moral fortitude in their early struggles.

It was not advisable to return the same way that they came in the morning because it was now evening. They did not know the way well enough, and the last four or five miles were entirely untrodden wilderness. They would not be without danger if they became lost in the woods. Having lost a sense of direction and walking in the snow in the night, after such a tiring trip, could be fatal.

Therefore, they decided it was advisable to go through 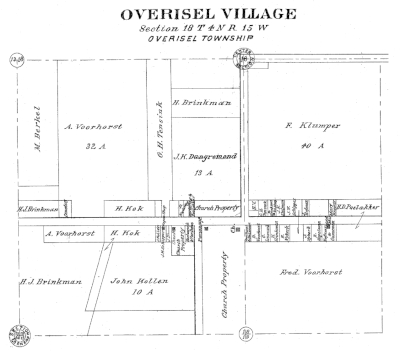 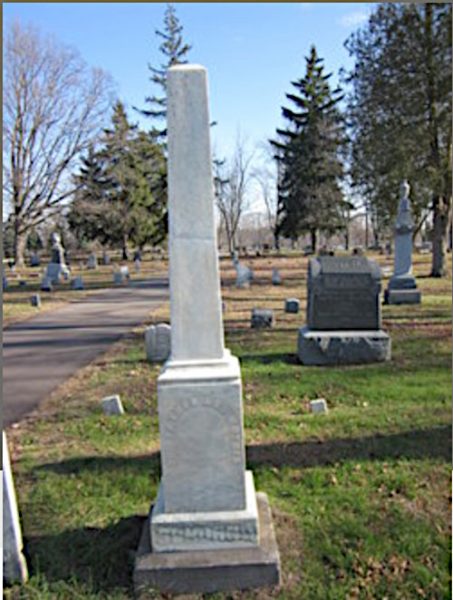 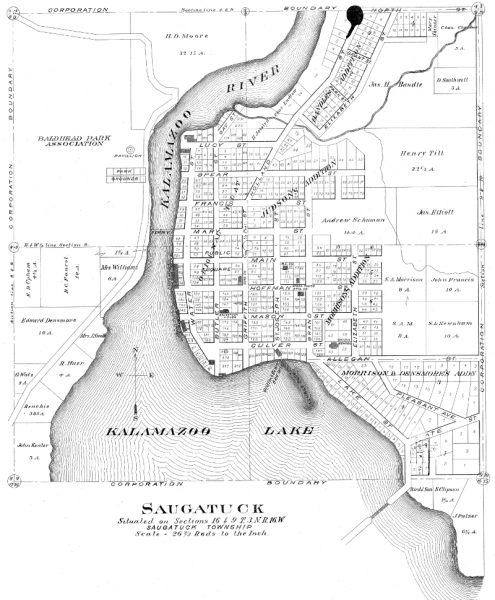 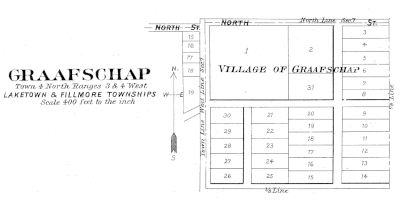 Village of Graafschap, Michigan in 1895.

Graafschap. This added at least four miles to the return trip, making a total of 18 miles, but it gave the advantage that they would be in better–known territory and that they would also be going past a cabin of the early settlers here and there. In case of need, then, they could find shelter.

Soon, our group passed Graafschap. It was much later, but now each step was a step nearer home, and the thought of their happy return gave new courage. Making their wives happy with the newly–acquired treasures, greatly–appreciated at such a time as this, was a happy thought.

It was now approximately 9:00. One of the group was so exhausted that, even with the greatest of effort, he could not go further. They then went toward Mr. Hellenthal’s home, and started to knock in order to see if, possibly, he would have a little something for them to eat.

The Kindness Of Colonists

So said, so done! They knocked, the door of the hospitable cabin opened, and Mr. Hellenthal saw our group standing in front of him—seen by the dim glow of the oil lamp. They told him that they wanted very badly to rest for a short while and would also like something to eat, in case he would have something to eat in his home.

Mr. Hellenthal also did not have an over–abundance. He said, “Wife, do you still have anything in the house?” And his wife had nothing other than dry corn bread, which really was supposed to be their food for the following day. In those days, everyone had food to spare for someone else. Speedily, coffee made from burnt rye was set out. Now, with the most hearty eating and drinking finished, they quickly talked about starting out again.

Mr. Hellenthal would gladly have had the group stay overnight. But one man had left his wife behind in such dire circumstances that he almost became like a wild man—even if the others stayed, he had to go on. The rest would not allow that, and, after giving thanks together and praying with each other for the Lord’s protection, presently the group walked out of the door. Mr. Hellenthal lent them his lantern in order that, through its glow, they might better be able to find the path.

A Mile Away From Overisel—And One More Obstacle

Alas! This pleasure was very short. Still two and a half miles from Overisel, the lantern went out. If anywhere, they really needed a light now.

When they slowly trudged along this way in the dark, for a mile on the beaten path, they came upon a half–mile stretch where the path had been cleared of standing trees. But the trees were still lying crookedly across the path. Mr. F. (Folkert?), one of the group, who also had figured out their route, went on ahead a little ways every time, in order to acquaint himself with the area so that he would know better where the holes were.

He called out every little while, “Men, over here!” Then the rest would have to go toward him. But they were so tired and stiff with the cold that, in their haste, they fell over the fallen trees more often than climbing over them. They would sit on them, putting first one leg and then the other over the tree trunks. They were going homeward and, together, they agreed that it was only a mile further before they would come to the end of their journey—Rev. Bolks’ “log cabin.”

Now, For The Promised Coffee

These miseries were also overcome! It was already midnight. Rev. Bolks and his wife were still waiting and watching. The coffee was ready, as was promised. They stayed but a short while, and soon the group went on—each to his waiting wife and children in their simple, plain log cabins.

They could tell and explain their many discouragements to us (today, if they were here). Be sure to understand that our ancestors were bound with strong ties of love and were very devoted to each other. That the Lord is to be acknowledged as the one who helped them, and that they were beholden to Him in this fearful time—they would gladly admit and say their heartiest thanks to Him with a tear in their eye.

If the young generation knows and appreciates the tribulations of our ancestors and the blessings of our God, which were poured out upon our grandparents, we must question, perhaps, if we depend upon and are as close to the Lord as they. I would still like to state here that the early settlers who are still living, though elderly, will attest to the accuracy of these various experiences. We learn from this to appreciate the persevering courage of our forefathers through the help of the Lord, and it will help our young generation to appreciate more the privileges and opportunities of today. 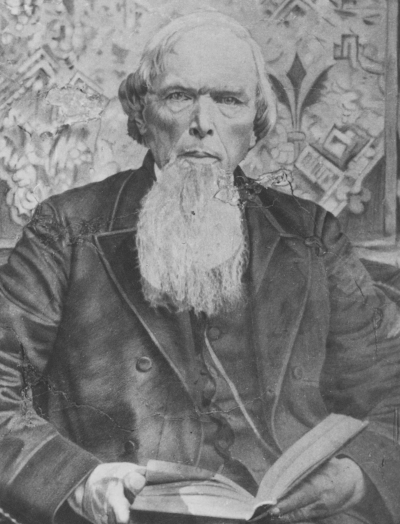 Reverend Seine Bolks, founder of Overisel, Michigan. “The first step that had to be taken in forming a new settlement for themselves was to buy land. Rev. Bolks was commissioned by the congregation to buy two thousand acres of land for them with the gold which they had taken with them from the Netherlands. Going to the land office in Ionia, Michigan, he bought the land at an average price of $2.06 per acre. This was then allotted to the different families, giving regard to the size of the families in determining the amount each was to have. It was decided that for each purchaser of forty acres of land one acre of dorpsgrond (village ground) would be given him, for there were plans to make a village. These plans failed, however, because the farmers wanted to live on their own land. Those who by lot had received sandy ground had the option to exchange it for clay. In gratitude for their pastor’s efforts at securing land for them, they gave him sixty-three acres.” 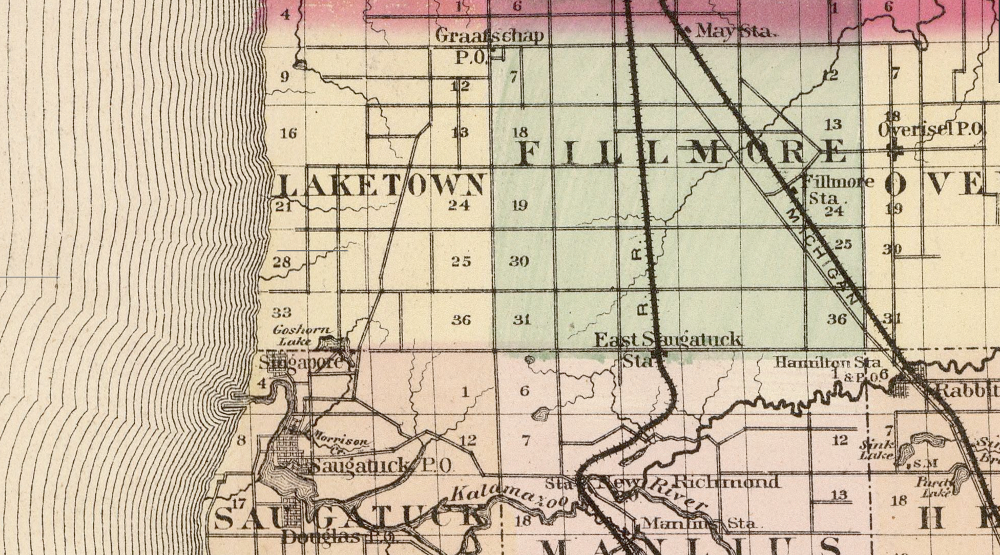 A portion of Allegan County, 1873. The journey began in the northeast corner of the map (Overisel). Section 26 of Fillmore Township, where Anton Schorno’s residence was located, is the section just left (west) of Section 25. According to the 1880 History of Allegan and Barry Counties, Michigan, the first store in the village was built and opened in 1851 by S. D. Nichols. “Until that year the villagers generally did their trading at the mouth of the river or at Singapore” (page 327).

If you enjoyed this article, please leave a comment in the box below. Thank you!