Loren is the editor of the Bentheimers International Society's quarterly Newsletter. This article first appeared in the July, 2011 issue. 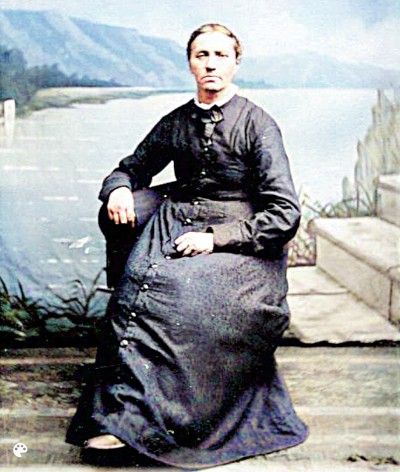 Fenigje Lemmen in a photograph taken in Holland, Michigan.

Berend Lemmen and Ide Wiggers were married in Laar, Grafschaft Bentheim in 1795. Their first child, Fenigje, was born the following year. Seven children were born by the time Ide died in 1810.

Now Fenigje Lemmen was the oldest child in a motherless family, with three children under the age of five. The family had been borrowing money from the benevolent fund of the church and had mortgaged the small field they owned in Drenthe.

Fenigje remained single, raising the children until she was 26 years old. At that time, she married Geert Ranters of Heesterkante in what seems to be an arranged marriage. Geert took the name “Lemmen,” as they stayed on the Lemmen household. Geert Ranters died a few years later, after three children had been born.

Fenigje was then forced to borrow money from the church poor fund. She took in an epileptic child and was paid a small amount for caring for her (the church awarded the “contract” to the lowest bidder: In other words, Fenigje was willing to take in the girl for the least amount of money).

As the secessionist movement swept through the lower county, Fenigje joined. She presumably lost access to the benefits of the church. She is on a list of people attending illegal religious services in 1842. Her youngest son, Jan Harm Lemmen, joined the large group going to America in 1847, and her daughter Lamberdina followed in 1854. In 1857, Fenigje emigrated with her oldest son Berend Jan and his family.

The arrivals list for the Lemmen family when they arrived in New York City.

Portion of the 1895 plat map of Laketown Township, Michigan showing property owned by members of the Lemmen family.

A New Home In Graafschap, Michigan

The family purchased property west of Graafschap, Michigan and cleared a farm. After a few years, the Reverend VanderWerp arrived. The family apparently loved him, as they kept a picture of him in the photograph album. When Fenigje fell ill, he came to visit. He was there when she was on her deathbed. He wrote the following obituary for her and had it printed in the denominational newspaper De Wachter, on Friday, June 17, 1870:

“Again our Graafschap congregation lost a sister to death. Fenigje, the widow Lemmen, reached the age of approximately 75 years. She was a pitiable soul who suffered much during her life; she lost her husband early in life, and lived in very sober circumstances with her children, all of whom were still small and helpless; but the Lord, before whom she constantly knelt [in prayer], saved her again and again and cared for her in all circumstances.

“During her life, she was known as someone who had sided with the people of God in spite of persecution and scorn. And even though she had, these last years, not experienced much assurance for the state of her soul, she still could witness, even on her deathbed, about other times and works of faith. Her confession was that she could add nothing [to her salvation], because then she would be lost, but that she had sought and found Christ and his righteousness, and it was her joy to live for Him.

“It was her hope that, in dying, that which the Lord had promised her and that which she had embraced in faith would be realized, that the God of grace, yes perfect grace, would grant her relief, even in the hour of death. And in that hope, and not without comfort, we beheld that she died in Christ and entered the eternal rest.”

She was buried in Graafschap Cemetery. On her grave, they put the inscription: Haar Leven en Heuse was Christus – Her Life and Reality was Christ.

Leave a Comment about this Pioneer Story in the box below. Thank you!