The Evert Bielefeld Family Moves From Hoogstede to Holland, Michigan

Emily Bielefeld Mouw from Holland, Michigan, researched the ancestry of her parents, Albert and Carrie Raak Bielefeld, for more than thirty years. Visiting and corresponding with relatives in Germany and in the United States demonstrated Emily’s love of her heritage and her desire to pass it on to future generations. This article was submitted by her daughter, Society member Mary Mouw. 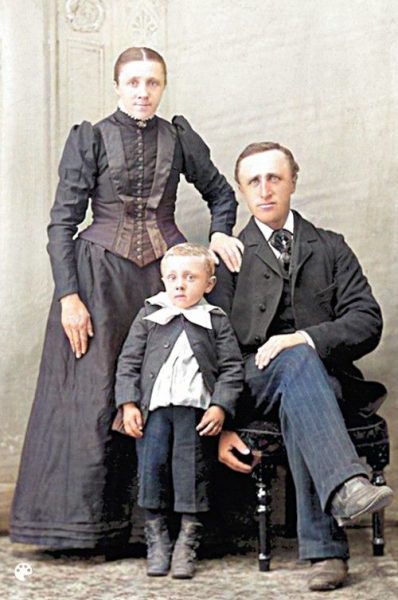 There was a little boy running in wooden shoes on a deck of the Steamship Friesland on 20 August 1892. This person was Albert Bielefeld, the 3 1/2–year–old son of Evert Bielefeld (32 years) and Ennegien Bielefeld born Schültink (35 years). This courageous little family left their home in Hoogstede–Bathorn, Kreis Bentheim, Germany, to come to America. 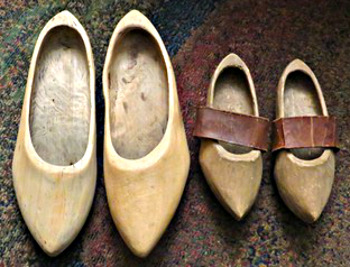 Evert had an Aunt Aaltje Slenk born Hardger and Uncle Jan Hendrik Slenk who lived in East Saugatuck near Holland, Michigan. Frau Slenk came to America in 1873. A letter from them, written on 15 June 1892, gave information on what they should bring along and what was unnecessary. 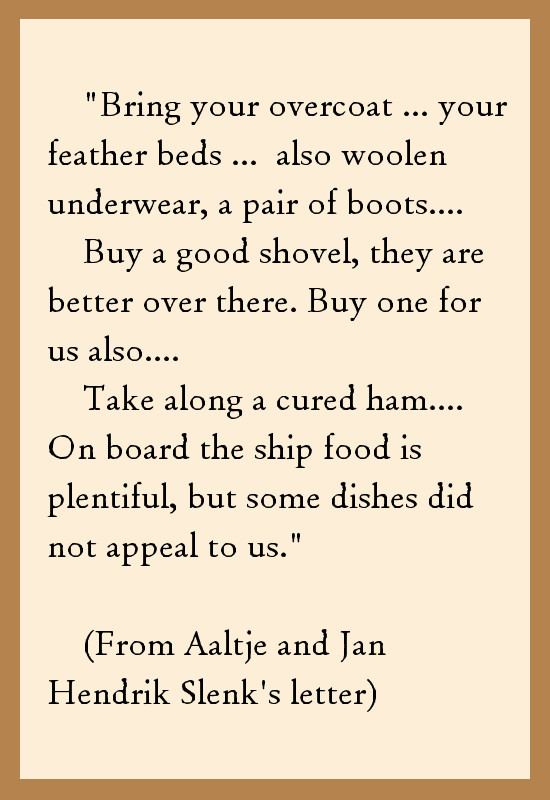 After working hard and saving money, on 30 July 1892, Evert and Ennegien were able to purchase a ticket for 450 guldens, a considerable sum, to sail on the Steamship Friesland, the Red Star Line. On 20 August 1892 they departed from Antwerp, Belgium, sailed to New York, and then directly to Philadelphia. From there they boarded a train to Grand Rapids, Michigan, and then to Holland, Michigan. This was a small but thriving city, only forty–five years old. It was founded in February, 1847, when a group from the Netherlands settled here under the leadership of Dr. Albertus C. Van Raalte. 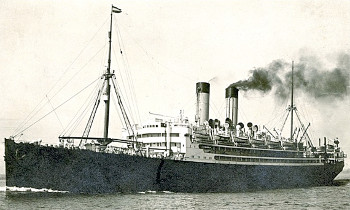 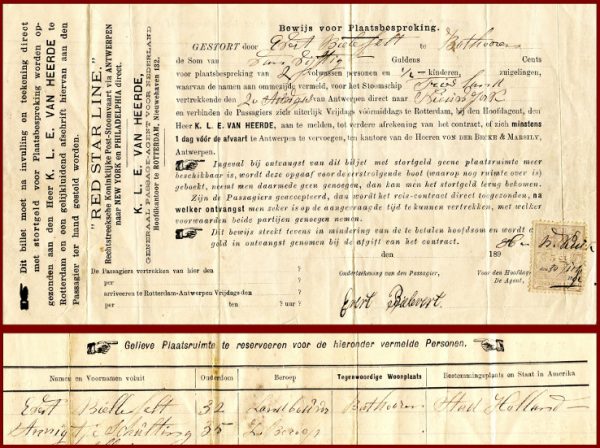 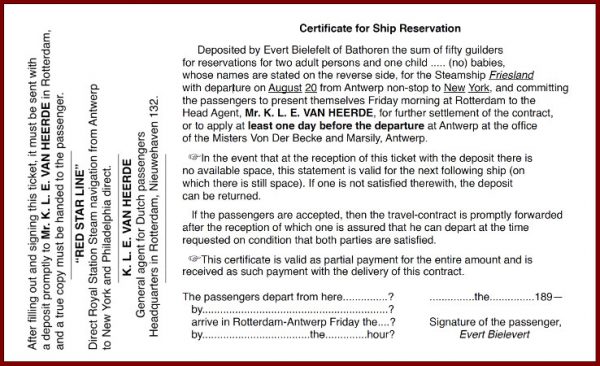 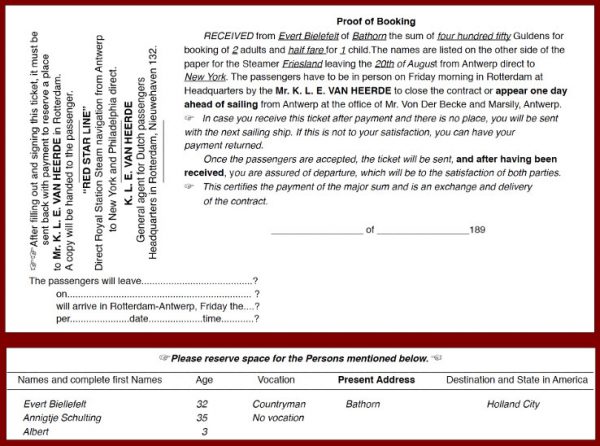 Above left: The Bielefeld family’s proof of booking passage on the S.S. Friesland, indicating that they paid 450 guilders. The writing is in Dutch.

Above right: The proof of booking, translated into English.

Left: Their certificate indicating that they paid 50 guilders to reserve passage on the S.S. Friesland.

All of their lives the Bielefeld family lived in Holland, Michigan. They joined the First Reformed Church as this was their church affiliation in Germany. In the tannery Evert worked diligently and, in time, purchased a nice home. 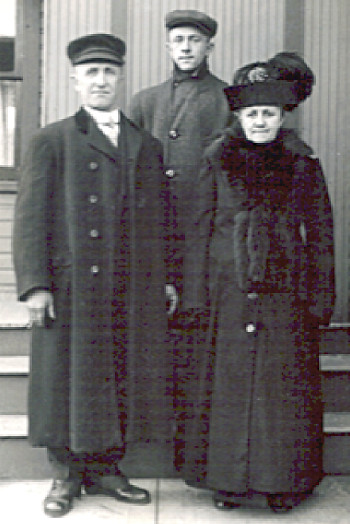 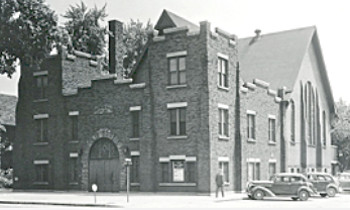 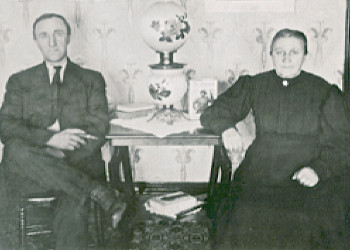 Young Albert attended school and soon learned the English language. He was a talented and creative boy and soon acquired many skills. As a fine Christian he became an elder and deacon at First Reformed Church. Here he sang in the choir, played the piano for more than fifty years, and was a Boy Scout leader for twenty–five years. In addition, photography, including developing, was a fascinating hobby for Albert. He worked over fifty years at the Holland Shoe Company, most of the time as a welter by trade. 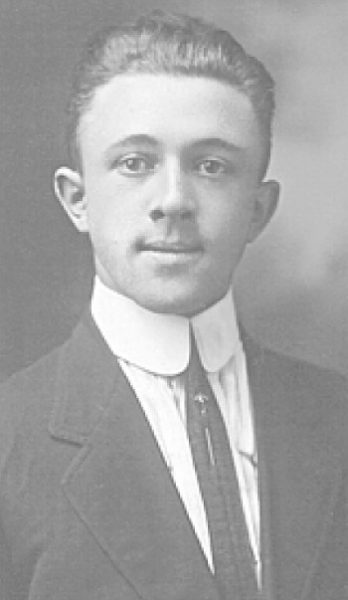 On 23 September 1915 Albert (born 4 November 1888) married a lovely young lady, Miss Carrie Raak (born 20 August 1893), daughter of George Raak and Anna Madderom Raak. They were married in their new home with afternoon and evening celebrations. Fifty years later they observed their 50th wedding anniversary in their same home with an Open House in the afternoon and evening. 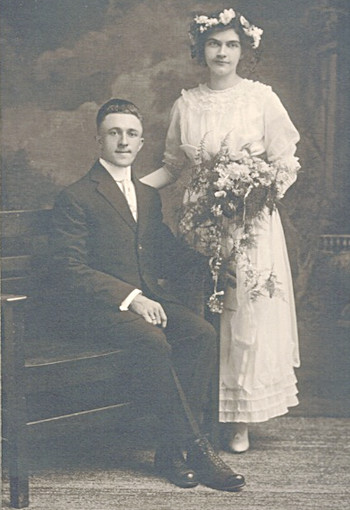 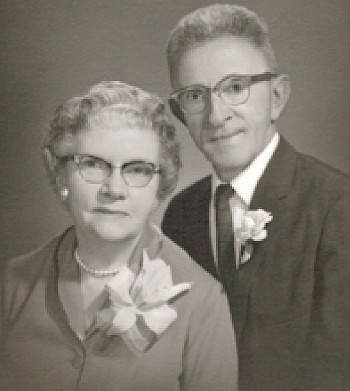 To them were born three wonderful daughters—Emily, Dorothy, and Elaine. Two sisters, Emily and Elaine, were graduated from Hope College in Holland, Michigan, and became teachers, while Dorothy earned her nursing degree from Butterworth School of Nursing in Grand Rapids, Michigan. 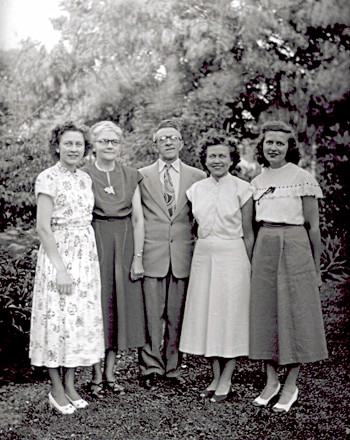 Jan and Jenne had a son, Albert Hardger (born 13 June 1816), who married Harmtien Bileveld (born 12 February 1807). They were married in Hoogstede, Germany, on 7 June 1839. Albert changed his last name to Bileveld, his wife’s name, as he took over the Bileveld farm, the custom of that time. They had two children who died in infancy. Harmtien died 21 December 1842 in Hoogstede at 35 years.

The Bielefelds lived in their home in Tinholt, County Bentheim, 106 years. It belonged to a German Count, so the Bielefeld family could not actually purchase the farm. This is where Evert, my grandfather, was born 5 July 1860. He was the older son of Albert Hardger Bielefeld and his third wife, Hindrikkien Warmer Bielefeld. Evert married Ennegien Schültink, my grandmother, on 24 November 1887 in Hoogstede. Ennegien, born 20 February 1857 in Emlichheim, Germany, was the daughter of Hindrik Schültink (born 3 June 1816, died 14 November 1893 in Emlichheim) and Gertruida Lubbers Schültink (born 9 April 1818 in Tinholt, died 11 April 1889 in Emlichheim).

Hindrik and Gertruida Schültink had two sons, Gerriet and Albertus, and two daughters, Zwaantien and Ennegien. The younger daughter, Ennegien, became the wife of Evert Bielefeld, therefore my grandparents, as their son Albert, born 4 November 1888 in Hoogstede–Bathorn, was my father. Albert was baptized in the Evangelisch–reformierte Kirche in Hoogstede. He was named after his grandfather, Albert Hardger Bielefeld.

I am so thankful that this brave couple, Evert and Ennegien Bielefeld, with their little son Albert came to America on 20 August 1892. Evert passed away on 18 November 1939 at 79 years and Ennegien on 11 February 1927 at 70 years in Holland, Michigan.

I praise God that Albert became my father. He was truly a father to be proud of—industrious, talented, loving and kind. Together with my dear mother, Carrie Raak Bielefeld, they established a beautiful Christian home with high ideals and moral principles. Their memory, a testimony to their faith in Jesus Christ, will always remain with us, their children, and grandchildren. 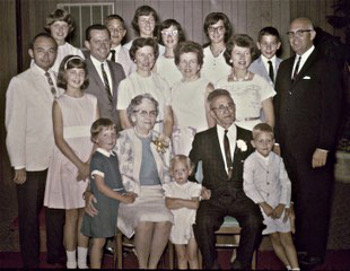 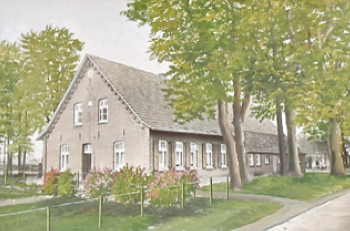 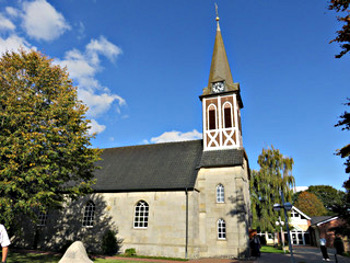 Evangelisch–reformierte Kirche in Hoogstede, Germany. Evert Bielefeld and Ennegien Schültink were married in this church on 24 November 1887, and their son Albert was baptized here on 9 December 1888. 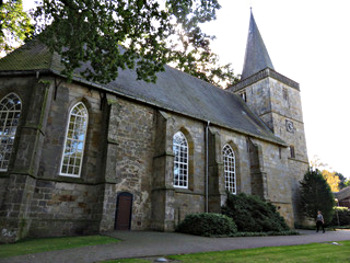 Reformierte Kirche in Emlichheim, Germany. Hindrik Schültink and Gertruida Lubbers Schültink and family belonged to this church. Here Ennegien was baptized on 29 March 1857 and made profession of faith on 24 April 1874.

The farm where Albert Bielefeld was born in 1888. Pictured are his granddaughters Mary, Carole, and Barbara. 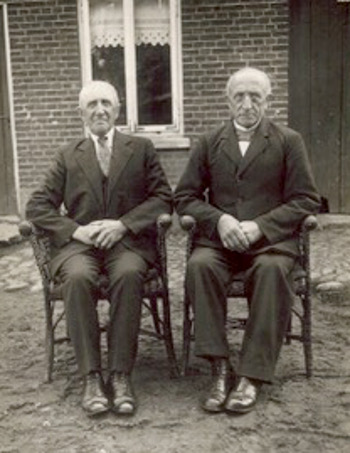 Evert Bielefeld (left) with his brother, Gerrit-Hindrik Bielefeld. At the age of 70, Evert visited his brother Gerrit–Hindrik (age 64) in Grafschaft Bentheim in 1930.

From 1974 to 1995 my husband, Henry Mouw, and I have had the opportunity to visit Germany six times. Our daughters and a son–in–law joined us on several occasions. We are thankful we could visit the communities from which our ancestors came. Warm hospitality was shown us by relatives in Emlichheim, Hoogstede, Lage, Nordhorn, and Wilsum.

We are most grateful to Fräulein Gesina Borgman for arranging our itinerary each year as well as for being our interpreter and guide and also to Fräulein Geertien Bielefeld, Herr Albert Klinge, and Herr Ferdinand Harmsen for genealogy information.

Swenna Buter Harger had asked Emily Bielefeld Mouw if she would write an article of her Bielefeld ancestors for a book entitled Aus der Grafschaft Bentheim in die Neue Welt: 1640—2002 A.D.  by Dr. Gerrit Jan Beuker, Swenna Buter Harger, Loren Lemmen and other contributors. She readily agreed. It has been translated into German and appears in Chapter 3, page 291.

This article also appeared in the Bentheimers International Society’s Newsletter in January 2019.

Are you related to any of the people named in this article? Leave a comment in the box below. Include your name and email address so we can contact you. Thank you!