Berend Jan Lemmen was born in Laar on November 11, 1824, the first child of Geert Jan Ranters and Fenigje Lemmen. He had a younger brother Jan Harm, and two sisters named Lamberdina (the first having died after living only a few days). Berend Jan ran the small family farm and was a weaver as well, like his father and grandfathers.

On May 12, 1848, Berend married Fenne Schoemaker from Kleinringe. He and Fenne had four children in Laar, Grafschaft Bentheim:

In 1847, his brother Jan Harm emigrated to Michigan and settled in Graafschap, followed by his sister Lamberdena in 1854. On August 11, 1857, Berend Jan, his family, and his mother sailed from Bremen on the Bark Laura and arrived in New York on October 5, 1857. Before leaving, Berend Jan sold the Lemmen farm and a parcel of land in the Netherlands.

The family settled in Laketown Township, Allegan County, just west of Graafschap. With the money from the sale of their property back home, Berend Jan was able to purchase 120 acres of uncleared land from Alexander Walsh of New York for $420. 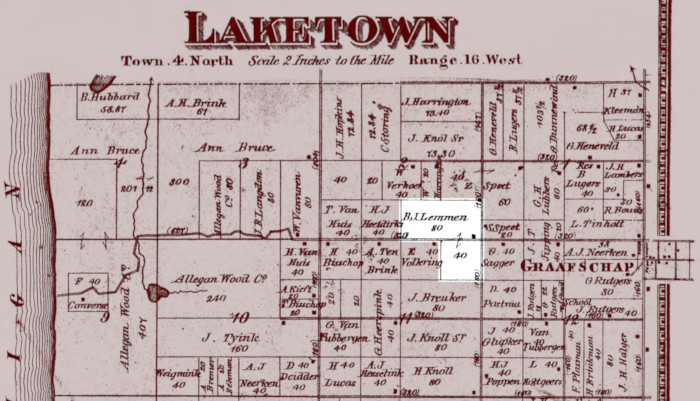 He and his children cleared the trees from this land, and by 1870, the 120–acre farm had 50 improved acres. Berend Jan also had three horses, three milk cows, three “other cattle,” a pair of working oxen, 50 sheep, and six pigs.

In Michigan, Berend Jan and Fenne had five more children:

After retiring from farming, Berend Jan moved to a house in the village of Graafschap. In his later years, he desired to return to Grafschaft Bentheim, but his wife Fenne feared the ocean voyage.

His mother Fennigje lived with the family until her death in May 1870. After Fenne Schoemaker Lemmen died in 1899, Berend Jan married  Jennigje Velthuis on March 9, 1901. Berend Jan died on November 2, 1916, just short of his 93rd birthday, and was buried in the Graafschap Cemetery.