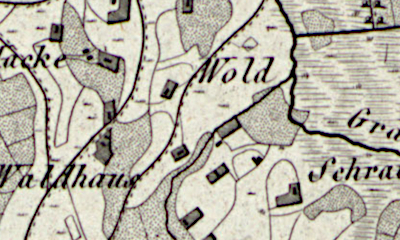 Anna Haverdink (Anne Haveding) was born on September 15, 1822 in Osterwald to the Ackerleute farmers Hendrik Völling and Swenne Haveding. She was the second of six children born to this couple. Her older sister, Gese Haveding, would also emigrate, while her four younger siblings remained in Grafschaft Bentheim.

In 1868, Anna and her 21–year–old niece Zwenne Haverdink left Osterwald for Bremen, where they boarded the S.S. Smidt for New York City. Also aboard were Gese Lefers Leusmann and her son Gerd Willem (her husband Hendrik emigrated one year earlier). After arriving in New York on September 18, Anna and Zwenne made their way to Laketown Township, Allegan County, Michigan.

On December 10, 1868, Anna married fellow Bentheimer immigrant Geert Lefers in the Graafschap church. She was 46, he 31 (their marriage certificate states that she was 44). Geert and Anna were charter members of the East Saugatuck Christian Reformed Church, a daughter church of the Graafschap church that was formed because people had to travel too far to attend services. But in March, 1870, Geert died when a tree fell on him.

On August 14, 1870, Anna married a second time to Willem Woertink. He was born on December 7, 1809, in Ommen, Overijssel Province, Netherlands. In the 1870 Federal Census of Fillmore Township (taken two days after their wedding), Willem is 59 years old, Anna 47. According to the 1880 census, Harmtje Haverdink and Geert Haverdink are living in their household.

Willem Woertink passed away on November 8, 1896, and was buried in the East Saugatuck Cemetery. Anna died in Saugatuck on September 17, 1898. She and Willem share a headstone, with Willem’s vital data engraved on the opposite side of the stone. 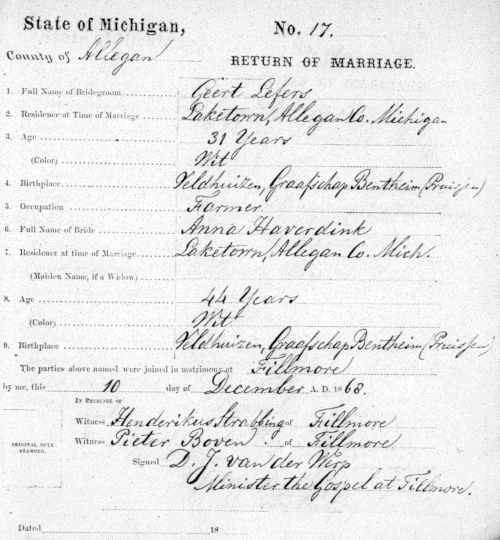 Anna Haverdink and Geert Lefers’ marriage certificate.  They were married by Rev. Vander Werp, with Hendrikus Strabbing and Pieter Boven serving as witnesses.

1880 Federal Census of the Willem and Anna Haverdink Woertink household in Fillmore. Living with them are Harmtje Haverdink (age 16, employed as a domestic servant)  and Geert Haverdink (age 20, working as a farmer). 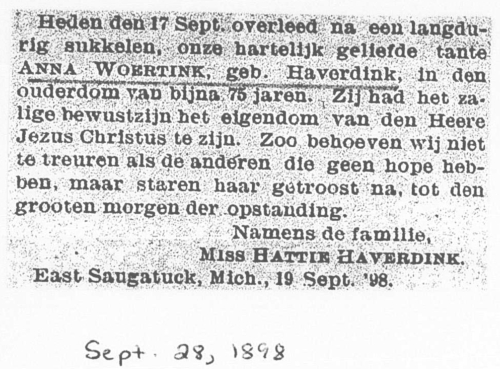 Anna Haverdink’s obituary. English translation: “Today, September 17, our dearly beloved aunt ANNA WOERTINK née Haverdink, passed away after a long struggle, at the age of almost 75 years. She had the blissful awareness of being the possession of the Lord Jesus Christ. So we need not mourn as others who have no hope, but gaze comforted after her until the great morning of resurrection.”