This article was published in the First in Focus newsletter of the First Christian Reformed Church in Allendale, Michigan. 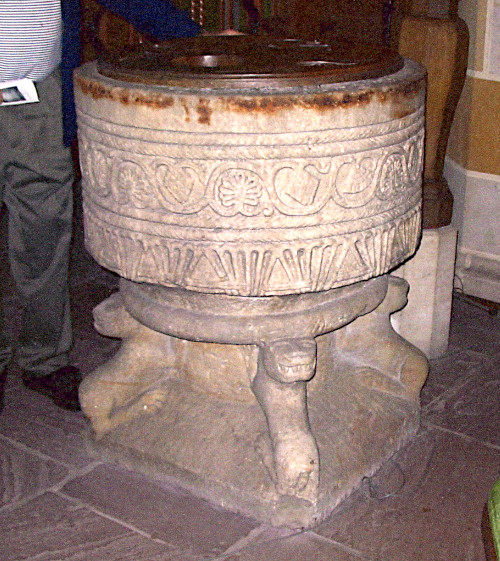 With its distinct square foot, round style, and the basin, the Emlichheim baptismal font is an example of the later style of Romanesque baptismal fonts. The sandstone quarries at Bentheim and Gildehaus produced these fonts between ca. 1170 and 1300.

Sunday morning, as Pastor Tim spoke of his experiences with various new baptismal fonts, I was reminded of another baptismal font, one which figures into my early family history. I would like to share the story of that font with you.

This font, or Taufstein, stands in the Reformed Church in the town of Emlichheim, which is located in Grafschaft Bentheim in northwestern Germany. For hundreds of years, the parish of Emlichheim and its church were home to my mother’s family, the Lottermans.

To give a little history of this area: The people of this area were descended from the old pagan Saxon tribes that lived here. In 687, Anglo-Saxon missionaries from England came and sowed the seeds of Christianity, but they sprouted very slowly. It took the Emperor Charlesmagne to force Christianity on them by defeating them in battles that raged intermittently for 33 years.

By the year 804, Christianity was the law of the land. Soon after, here in Emlichheim, a wooden chapel was erected on the exact same spot where formerly their pagan rituals had taken place—where their heathen priests had danced and chanted formulas and blood sacrifices had been offered to their gods.

Charlemagne laid down rules for these new Christians: the bodies of the dead were no longer to be burned; they were to be buried next to the church “on holy ground,” with the nobility buried in vaults inside the church. (From this we get the word Kirchhof, or churchyard or graveyard.) Also outlawed were blood sacrifices. Death was the punishment for breaking either of these two laws.

Sometime around 1100, the wooden chapel was replaced with a church built of Bentheim sandstone. Although enlarged and renovated a few times, this is the Emlichheim Reformed Church building still used today. Sometime between the years of 1200 and 1250, a baptismal font or Taufstein was carved from Bentheim sandstone and placed in the church. This Bentheim sandstone came from quarries located a few miles away near the towns of Gildehaus and Bad Bentheim, in that same county.

On the upper part of the base of the font, note that there is an ugly face (a lion) carved into each of the four corners. These were put there to scare away evil spirits. Even though the people of the area were now Christians, the old pagan religion had a strong hold on the people, as evidenced here by the scary faces on the Taufstein. The wooden cover on the top of the font came at a later date. On it is inscribed: “Wer da glaubet und getauft wird, der wird selig werden.” Who believes and is baptized, will be saved.

Nevertheless, through Catholic times (the earliest days until the Reformation came to Grafschaft Bentheim) and Protestant times (Lutheran from 1544 to 1588; Reformed from 1588 to today), the old Taufstein has stood in its place near the center of the church. 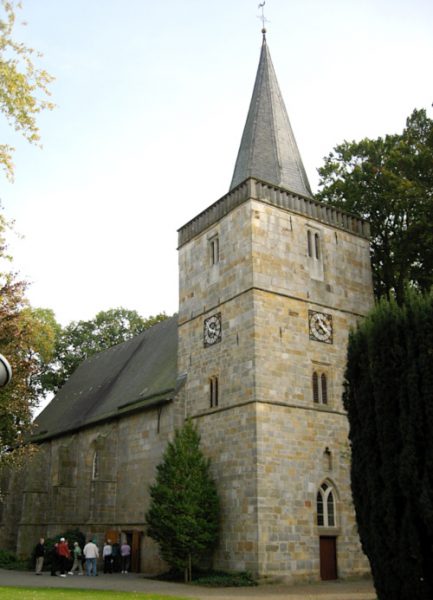 The Emlichheim Reformed church’s square tower originally was two stories tall and on the west wall. It was moved to the north wall in the 13th century. In 1558, the tower was raised by one story and topped with an eight–sided slate tent roof and a perforated parapet. 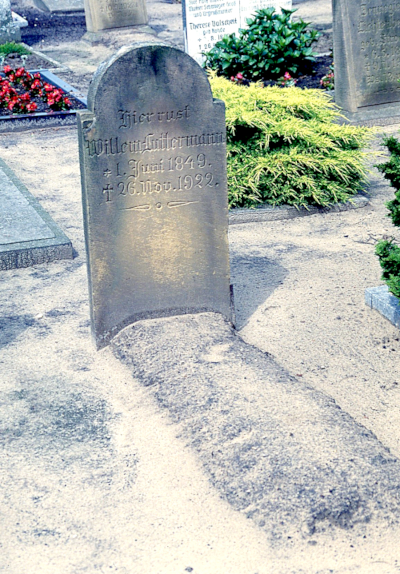